8 Paprika Substitutes for Every Dish

Yes, You Can Toast Bread in an Air Fryer – Here’s How!

How to Clean Your Coffee Maker Without Vinegar: 5 Easy and Powerful Substitutes

It all comes down to what you need the paprika for. If your dish calls for paprika to bring that rich, red color (like chili or soup), it should be substituted with something that has a similar flavor and color. Maybe you only need it for garnishing a dish, or you need something to create that distinct paprika flavor profile in a complex dish. Whatever your situation, you will find something on our list that will be a perfect substitute when there is no paprika in sight.

Below we've outlined 8 paprika substitutes that will fill the ingredient void as seamlessly as possible. 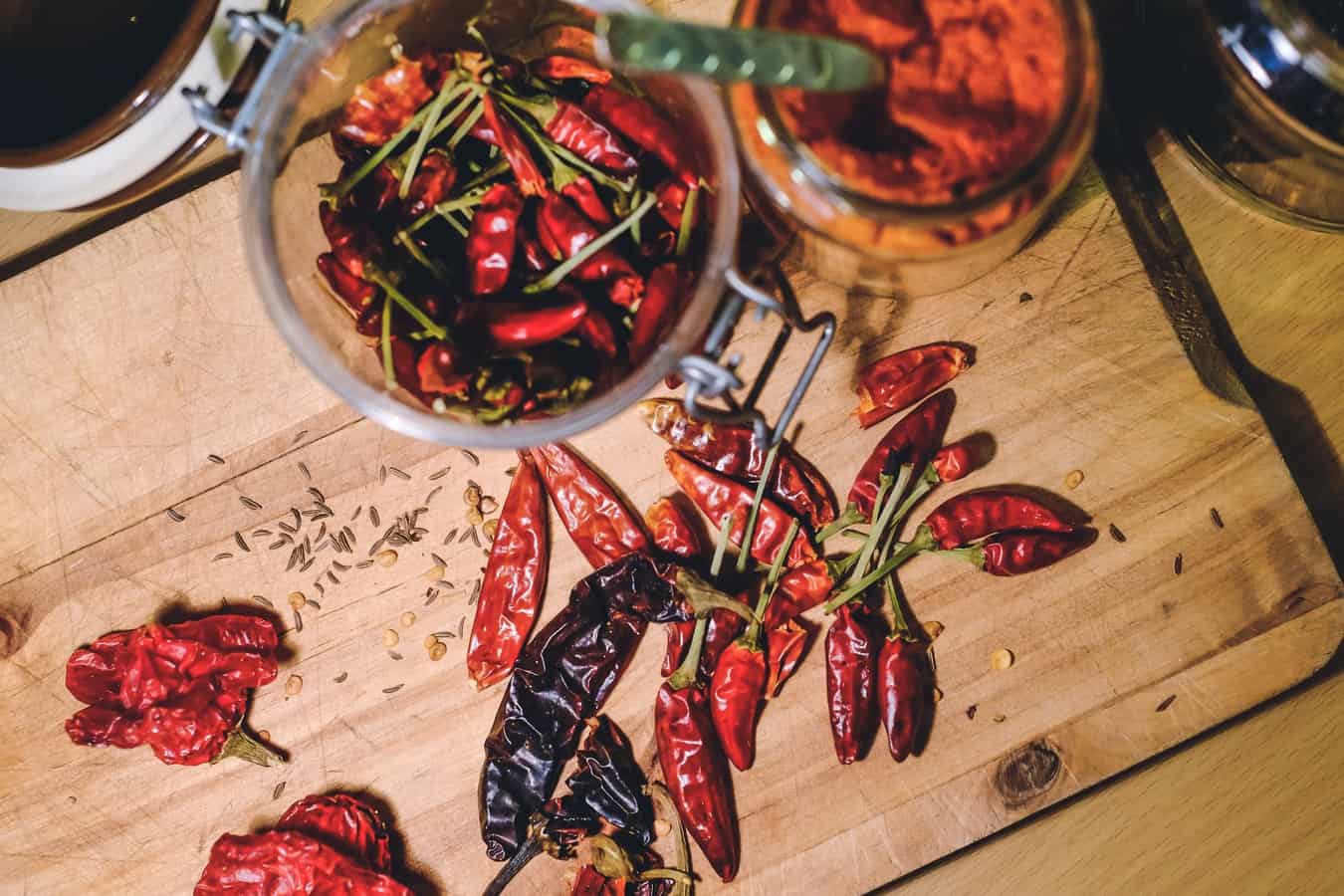 What Exactly is Paprika?

Paprika comes from grinding dry pods of bell peppers or other chili peppers (anything belonging to the species Capsicum annuum). This very popular spice enhances dishes and adds a wonderfully rich, bright orange-red color with a unique & rich flavor (these compounds are released when heated). Generic paprika is typically mild and sweet, made from pimento peppers, and always made with only one ingredient. It's actually the 4th most-used spice in the world!

Most commercial plants grown to make paprika come from Spain, South America, California and Hungary. Paprika comes in a variety of flavors, and can be hot, smoked, or sweet. The deeper the red color, the sweeter the variant of paprika. When cooking, it is very important to know which of the three types of paprika is needed to create the correct flavors for the dish at hand.

Besides providing a rich, beautiful color and flavor, paprika provides great health benefits, and can be used as a stimulant and energizer.

Paprika is actually Hungary's national spice, and for good reason. It is used to flavor and color typical Hungarian dishes such as goulash, soups, rice and sausages.

The thing about American paprika, is that it's usually made with basic red sweet peppers, and is used as more of a coloring agent than to add flavor. The thing about Hungarian (or Spanish) paprika, is that there are 8 different varieties, and harvesting and making this spice is a BIG deal to them. The processing of paprika dates back more than 500 years. In the U.S., at a typically grocery store, you will find one variant, and it will be mild and quite bland compared to what you can find overseas.

Nevertheless, paprika is used so widely these days, and for good reason. With the world we live in, it shouldn't be hard to find the exact type of paprika you're looking for. 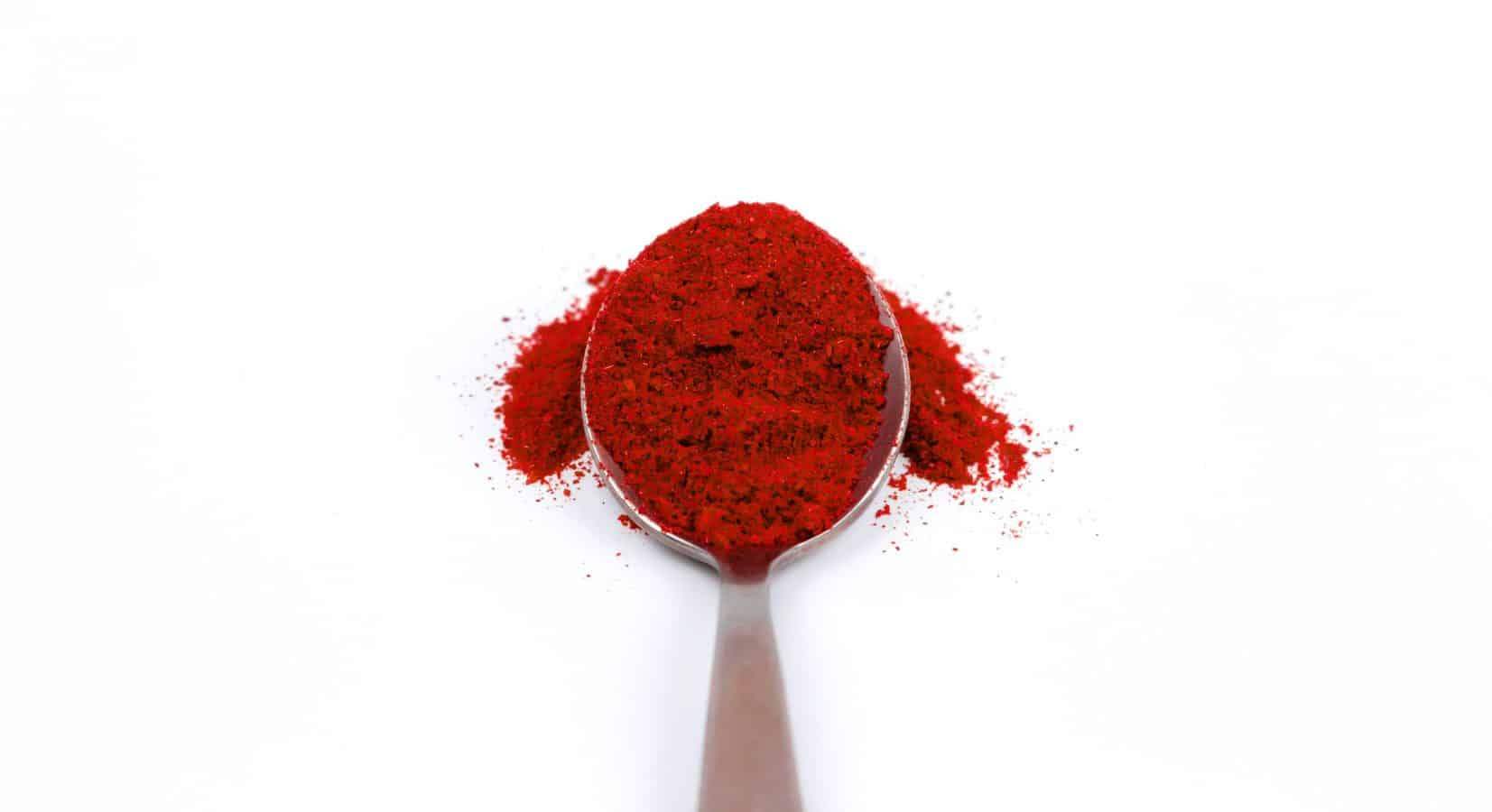 Cayenne tends to pack a lot more spice than your average paprika, but both color and flavor are comparable. If you don't like spicy dishes, this is not the substitute for you. Cayenne typically ranges from 30,000 - 50,000 SHU (Scoville heat units) whereas basic mild paprika usually notches in at around 500 - 1,500 SHU. Take into consideration, cayenne packs a lot of heat, so be aware, you may need to use much less than is called for.

Try this: ½ tsp cayenne can also be mixed with sugar or honey to retain that distinct sweet flavor of paprika.

Salt, cream or both can be added to reduce the spiciness of cayenne, if you accidentally overdue it (depending on your recipe).

Flavor Notes: intense, sharp, enhances other flavors in a dish 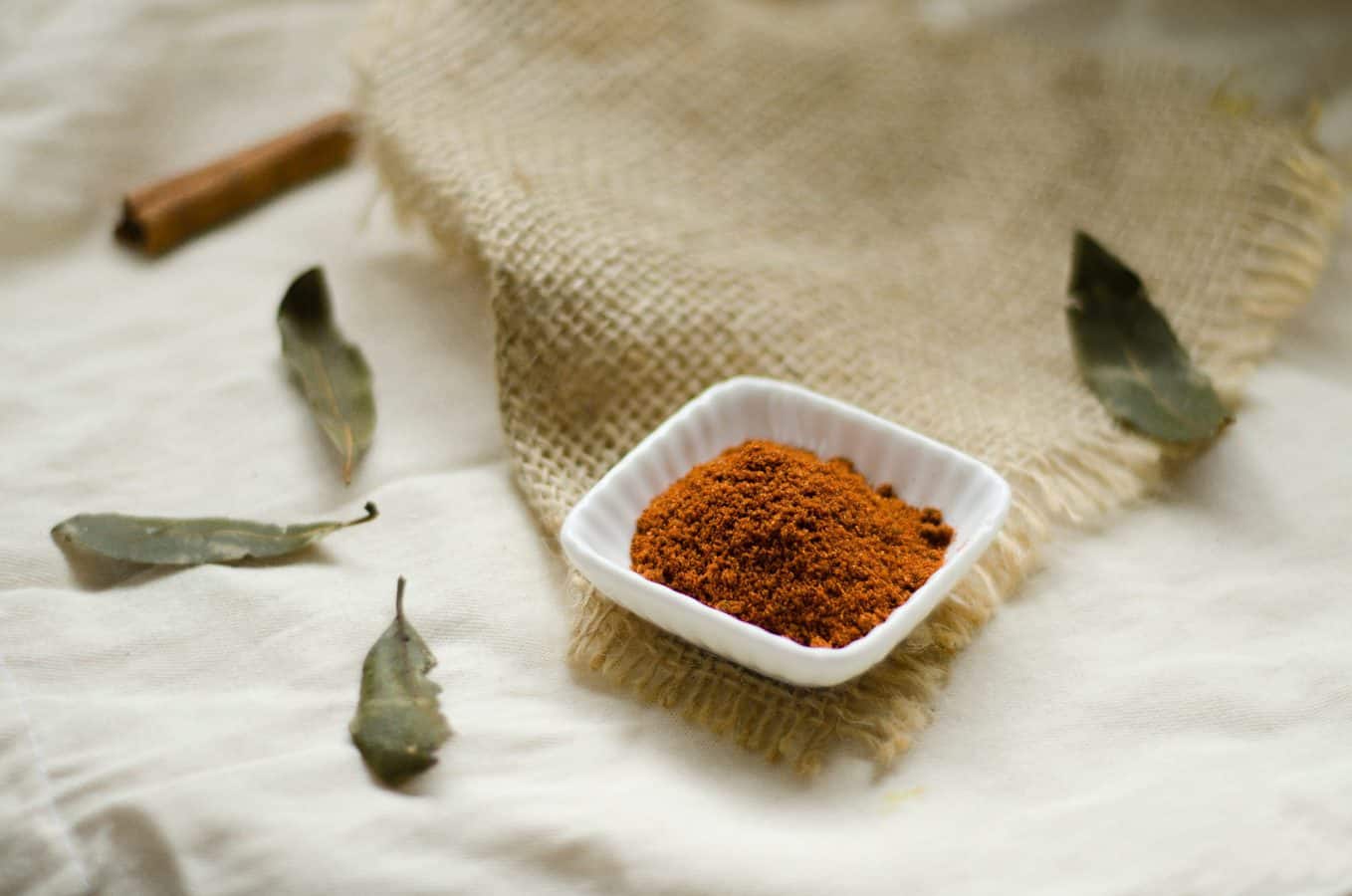 Chili powder is usually hotter than a basic, mild paprika powder. It's used to season dishes, and can be a perfect replacement if you don't have any paprika. Keep in mind, chili powder is actually a blend of ground chilis mixed with garlic powder, cumin, and oregano, whereas paprika is made singly from peppers. There is usually some cayenne in the mix as well, and depending on how much, chili powders range from mild to moderately spicy. Always do a taste test before throwing it into your recipe.

Check out our article that includes a list of the many health benefits of chili powder.

Flavor Notes: dependent upon what the blend is made of // Savory, medium heat 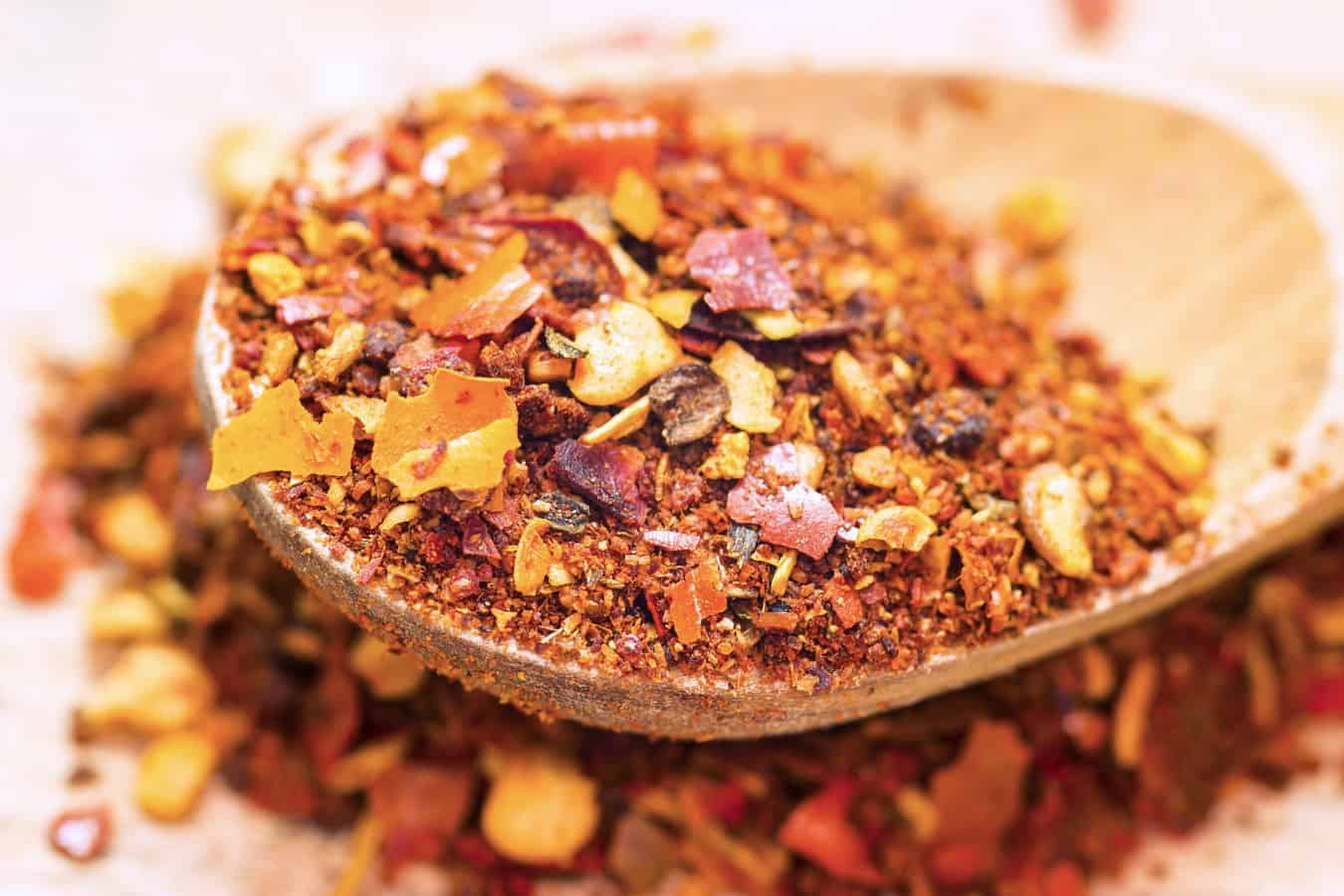 Chili flakes are made by crushing dried, spicy red peppers. They add a slight heat, flavor and color, but texture is obviously different due to the thick flakes. Sometimes chili flakes have a smoky flavor, which is similar to paprika. If you need a replacement for paprika and this is all you have on hand, it will add a similar flavor, just keep in mind the texture is coarser (you can always grind it down to a finer powder with a mortal and pestle). 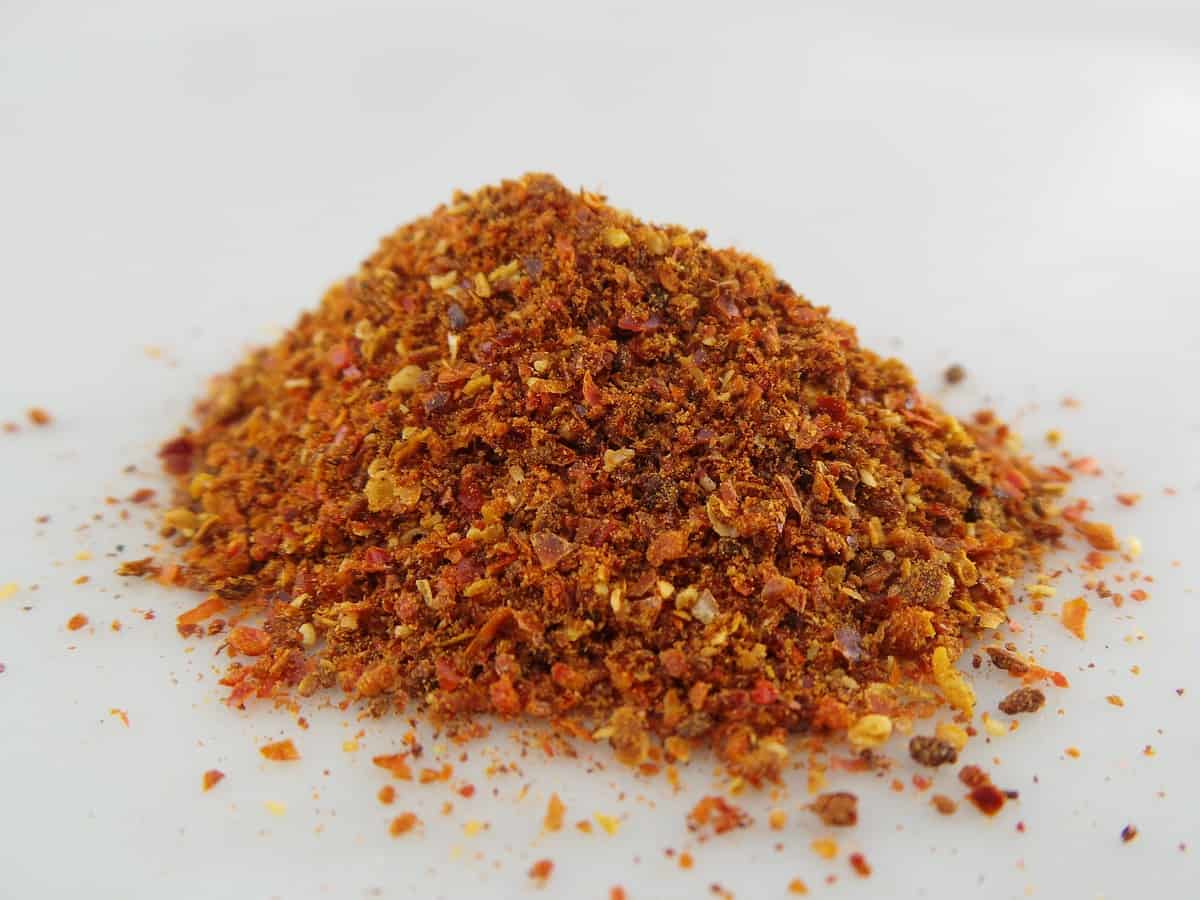 Native to Turkey, the Maras chili is naturally wet and known for its oily texture and moist appearance. After being dried in the sun, they still retain much of their moisture, and are then ground into flakes. Maras pepper flakes are typically used in Middle Eastern and Mediterraean cuisine. The chilis are medium hot, coming in at about a 4-6 on the heat scale and 10,000 SHU. The Aleppo pepper (#6 on our list) is the most similar, although Maras are slightly smokier with a bit more heat. 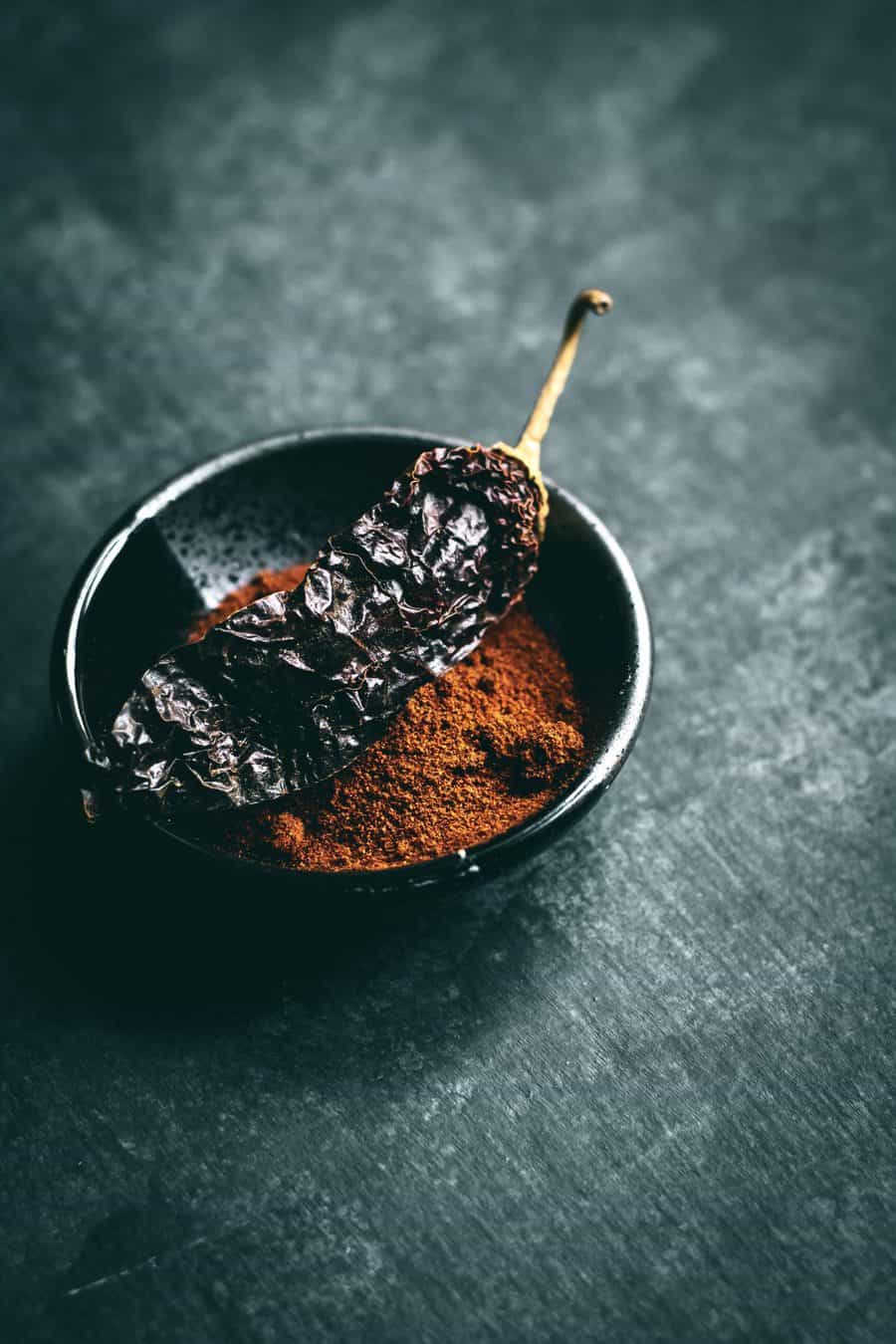 A type of chili powder that is very similar to paprika, Ancho powder, is made from dried poblano peppers. This single ingredient spice, made entirely from these sweet chilis, packs a mild heat and a slight smokiness. It can be used as sparingly as salt & pepper in most cases. Order some here so you can always have some of this unique spice on hand to really take your recipes to the next level. It really makes a perfect Paprika substitute. 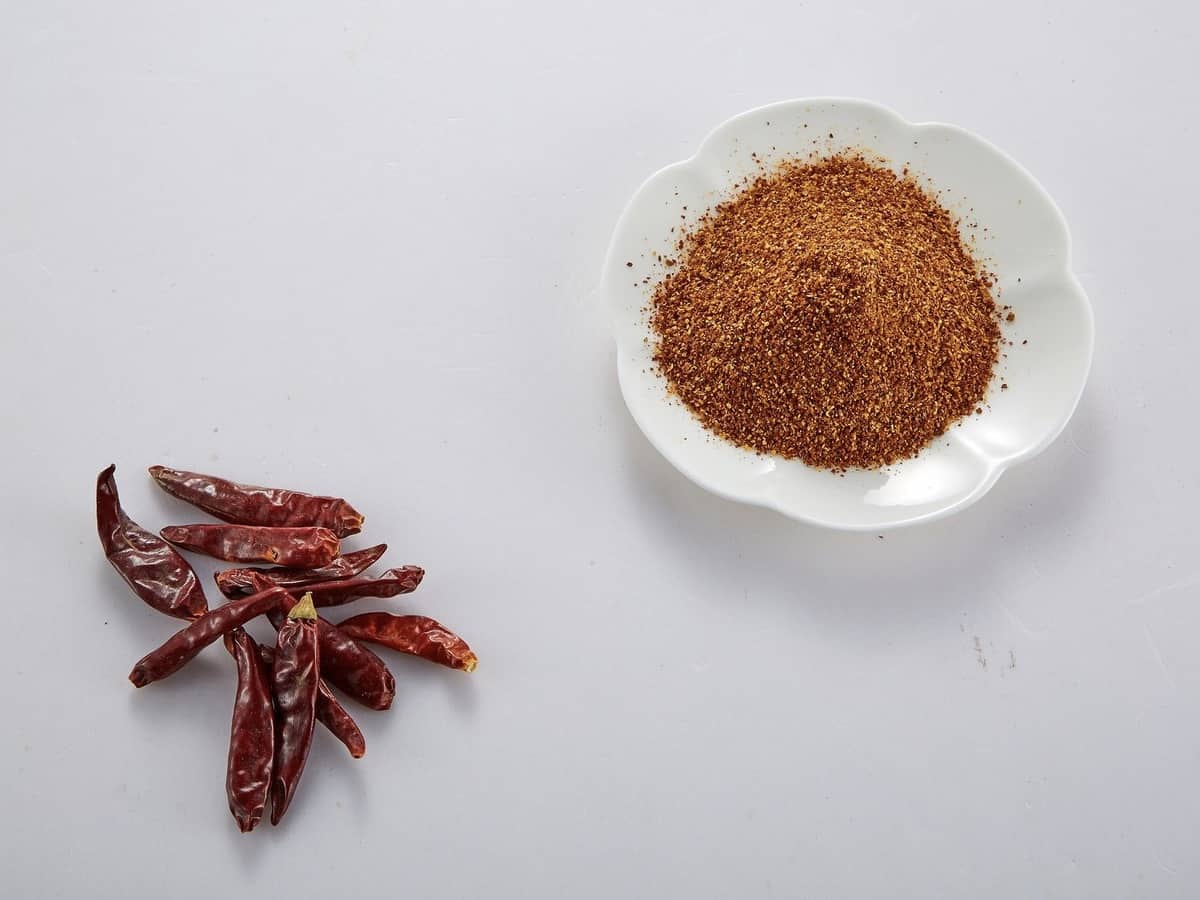 This Middle Eastern spice has a very complex flavor, but can be used in a pinch as a replacement for paprika. The texture is a bit more course than paprika, but when mixed into a recipe, this won't matter much.

Although not the typical ingredient found in every kitchen, it's not too hard to get (you can easily order some online). Aleppo powder has a comparable heat to a jalapeno or mild serrano pepper (around 10,000 SHU) so it’s not as hot as cayenne. 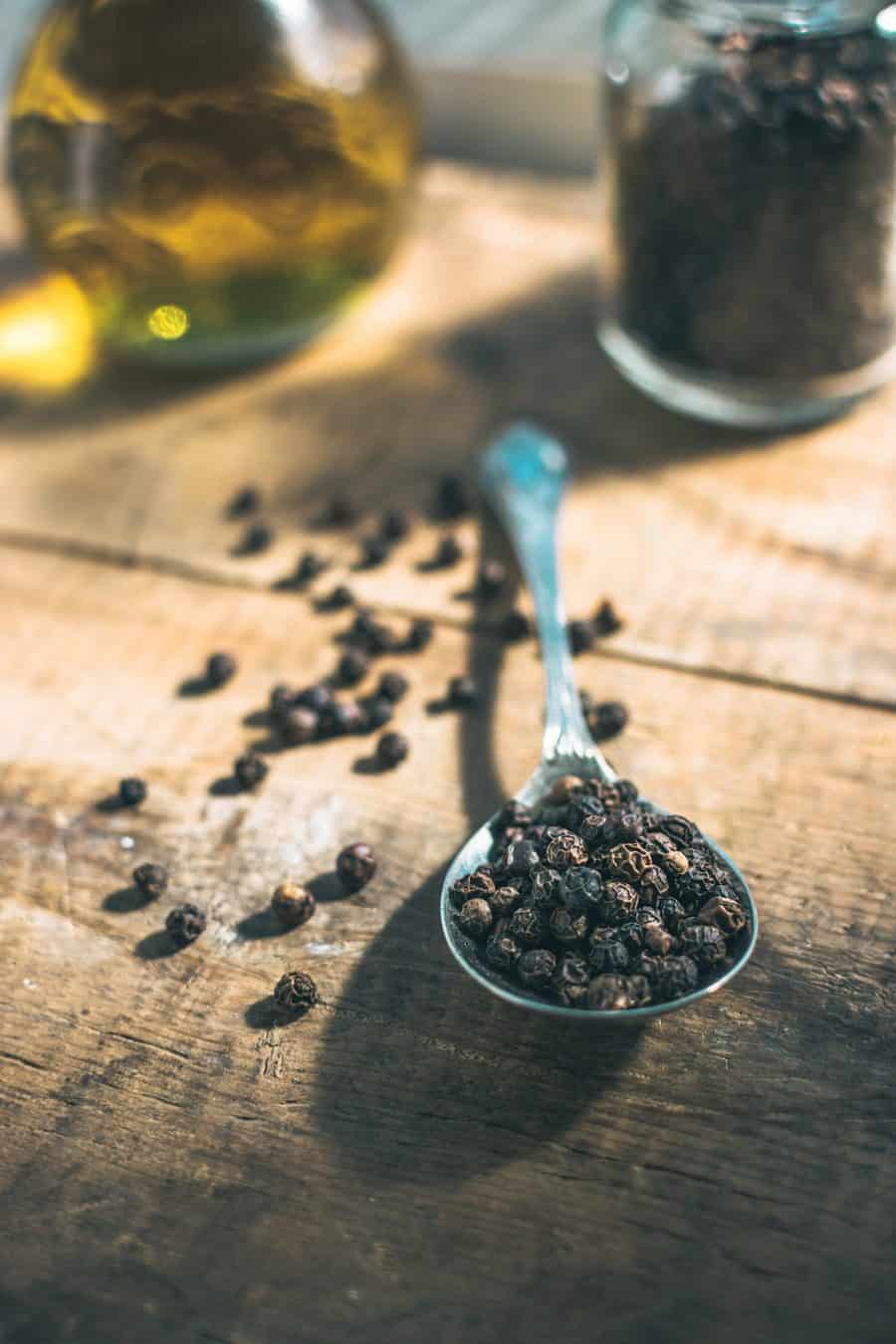 Black pepper is actually unrelated to any of the peppers mentioned above, and comes from the fruit of a flowering vine. It is not part of the pepper family, yet it has a similar flavor profile as many peppers. Add and taste incrementally to make sure you don't overdo it. This will fill the void but it won't offer an identical flavor. The darker the peppercorn, the richer the flavor.

Suggested Dishes: Not a great substitute for italian or tomato based meals, but can add that needed flavor and spice to a dish. Best to use only if red color is of secondary importance to your dish. 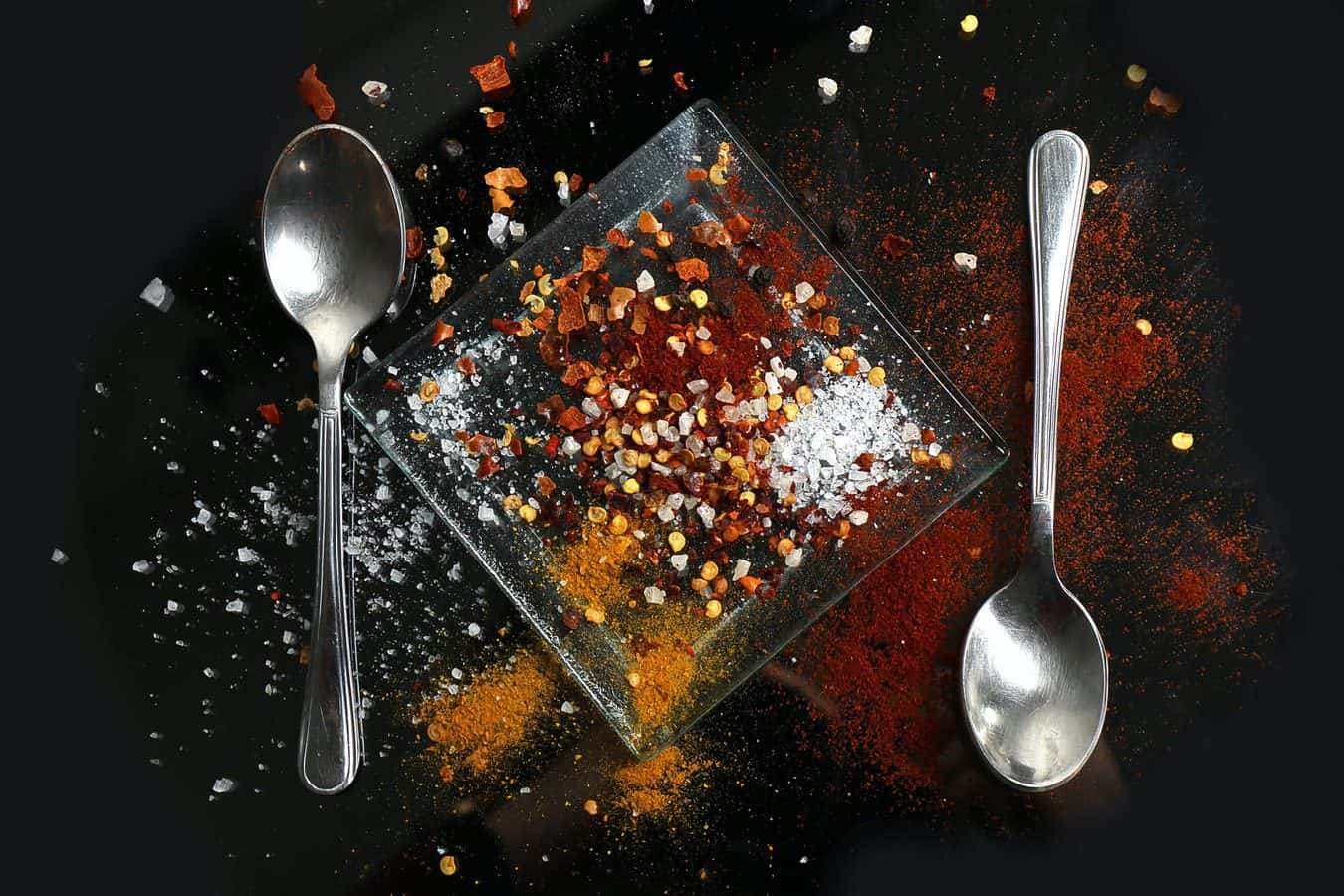 With its birthplace in Louisiana, where some of the best food in the world is made, Cajun spice is typically a blend of cayenne, black and white peppers, and other spices. It is more mild than cayenne by itself, but can still pack some heat.

Cajun spice can actually contain a blend of many different spices, such as paprika, garlic powder, onion powder, cayenne, oregano, thyme, salt and pepper. Hence, there are a lot of flavors happening here. There are tons of great recipes to make your own cajun blend at home, but considering it calls for paprika (which I'm assuming you don't have at the moment), you may just have a store-bought jar of this hanging around in the back of your cupboard.

Make Your Own Paprika at Home 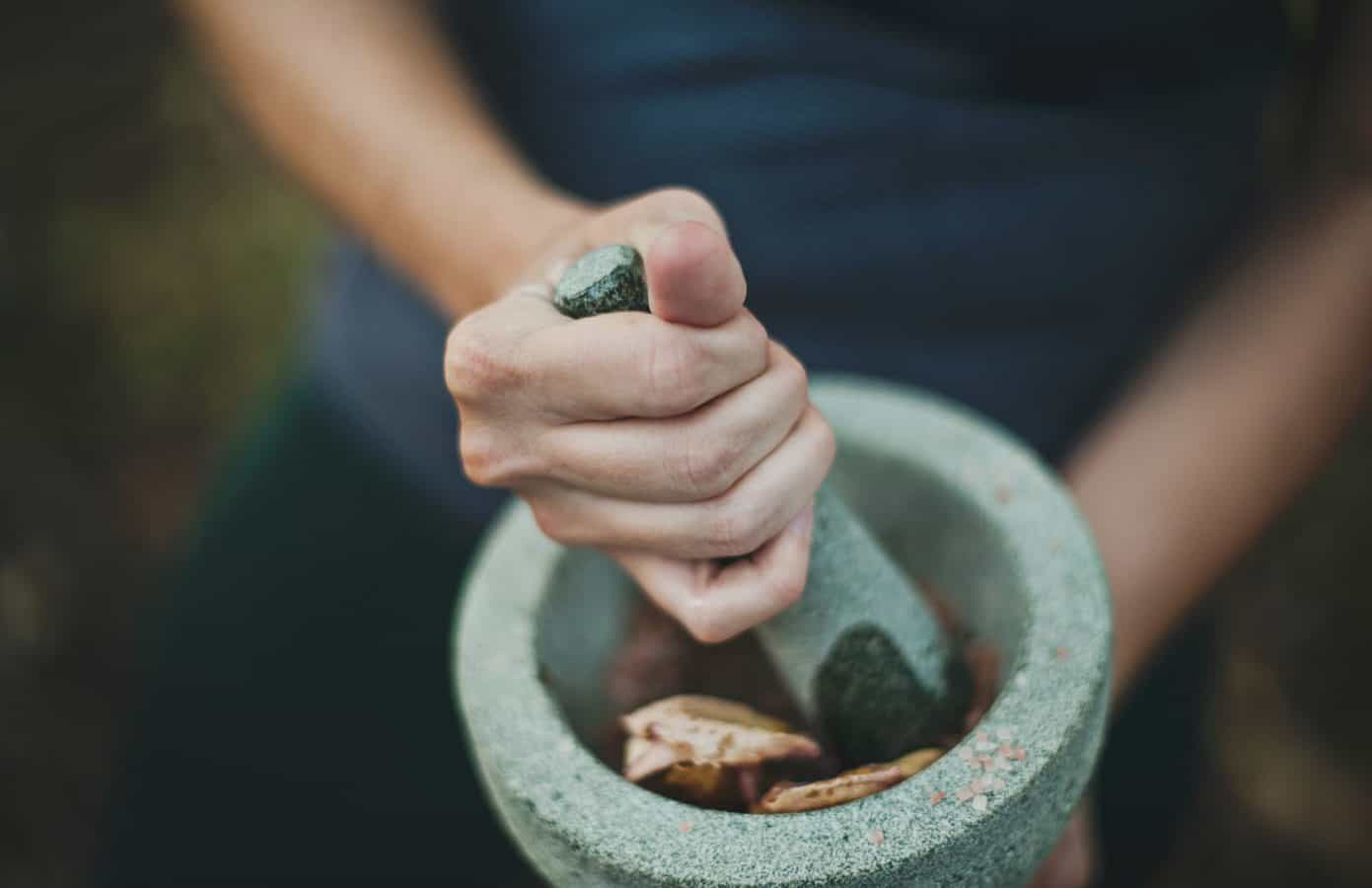 You can be a total overachiever and actually make your own paprika powder or flakes at home! Just follow a few simple steps:

If you decide to go this route, your ground paprika will be more fragrant, distinct and flavorful than store-bought varieties.

You can use 2 tsp. homemade bell pepper powder for every 1 tsp. paprika called for in your recipe.

A vital ingredient to some of the greatest dishes life has to offer, paprika is truly one of a kind. But when you're in a bind and need something to fill its place, we hope you find a suitable ingredient here. If you have any questions, don't hesitate to leave a comment below.