High in the Italian Alps, a unique breed of cows brave inclement weather for most of the year to make their home in the D’Aosta valley. They are milked daily by their caretakers, and each batch of milk becomes a few precious wheels of that elusive treasure: fontina cheese.

Since its debut in the 13th century, fontina has become a popular and recognizable cheese style, and unique versions of it are now produced worldwide. This article is dedicating to revealing all there is to know about this ridiculously delicious cheese.

What is Fontina Cheese? 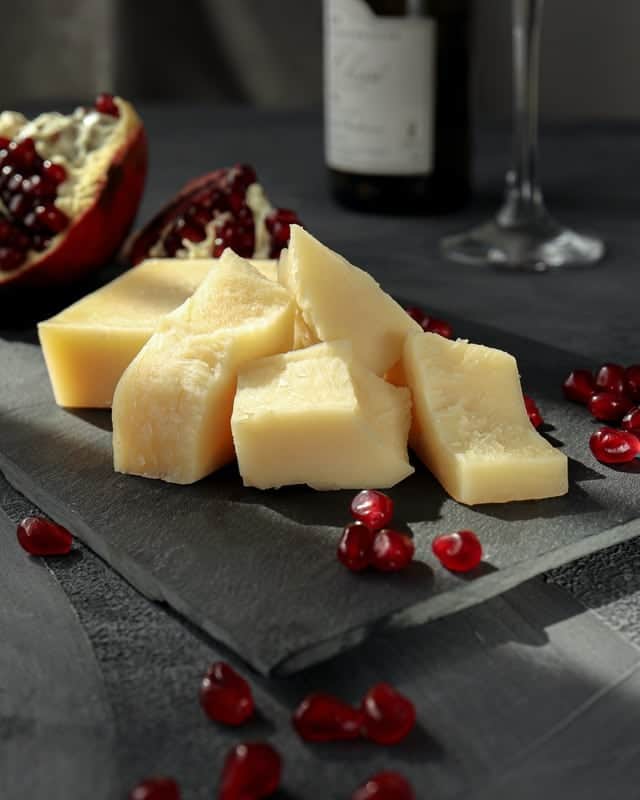 While many cheeses are labeled “fontina,” there is only one authentic Fontina, distinguished with the coveted Denominazione di Origine Protetta (DOP) designation. Labeled as Fontina Val d’Aosta, this singular cheese is crafted from the raw, full-fat milk of Valdostana cows, which graze in a valley of the Italian alps.

Each batch of cheese must be made from a single milking. For safety reasons, the raw milk is processed into cheese within two hours of milking; because the milk still has natural antimicrobial enzymes at this point, it keeps the pathogen content very low.

Cheesemakers add autochthonous Streptococcus thermophilus and Lactococcus lactis to fortify the cultures already present in the raw milk. They also use calf’s rennet to coagulate the acidified milk into curds, which are then molded and briefly pressed.

Wheels then transition to a period of brining, during which time they are flipped and brushed with a salt solution every two days. This process (called “washing”) causes them to develop surface cultures, including Coryneform bacteria, lactic acid bacteria, and several species of yeast.

The resulting cheese is semi-hard, creamy, and yellowish with small, recognizable “eyes” (holes) and a smeared rind tinged with orange.  It has a reputation for melting very well, and its earthy, mushroomy flavor intensifies with continued cave-aging. Many locations outside the Aosta valley create their own versions of fontina cheese. Argentina, Denmark, the United States, France, and even other regions in Italy all produce fontina-like cheeses.

Cheeses made outside the Val d’Aosta and not labeled with the DOP can change any step in the “official” fontina-making process; it is open to interpretation. Nearly without fail, fontina-like cheeses outside the Italian Alps use pasteurized milk, which significantly changes the flavor; cheeses made from pasteurized milk tend to be milder, less sharp, and not so earthy.

These cheeses most resemble the original, with a washed rind (sometimes no visible rind) and an aromatic center. Their taste is often mushroomy because cheesemakers may follow the tradition of using unpasteurized milk.

However, it will not precisely mimic Fontina Val D’Aosta because the milk comes from different species of cows and the aging caves are not in the same location. Italian-style fontinas have a very low moisture level compared to other fontina styles, so they may not melt as well as others.

You will find Danish-style fontina covered in red wax instead of a washed rind. It is also made from pasteurized milk and aged for a shorter time. These alterations together give a much milder, less pungent cheese that is more pliable and sliceable than Italian fontina. It has a reputation for melting perfectly.

With the gentlest flavor of all fontina types, American fontina is usually produced in the Danish tradition. This means that it uses pasteurized milk, is pH-adjusted using citric acid, is stored in wax, and is high in moisture. In fact, consumers could easily mistake an American-style fontina for a Gouda. American fontinas age for an even shorter time than Danish fontinas. Still, they tend to melt well and are extremely approachable. 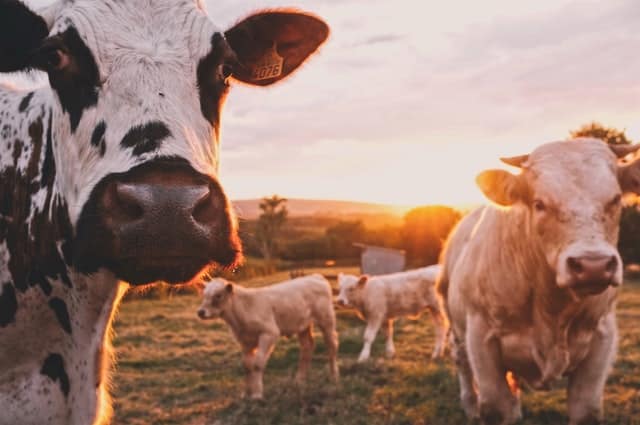 These are variations on Fontina, but they can be nearly unrecognizable from the original Fontina Val d’Aosta. Their properties depend on how much the cheesemaker has altered the process.

Raclette cheese is known for its powerful aroma and funky, strongly mushroom-like flavor. It melts very well and pairs with many of the same flavors as Fontina Val d’Aosta. Although many people find themselves put off by the smell of raclette, the aroma dissipates upon heating. Raclette’s taste is an excellent substitute for Fontina Val D’Aosta.

4) Challerhocker or any other washed-rind Alpine cheese

Fontina Val D’Aosta itself is a washed rind Alpine cheese. This category of cheeses tends to be pungent, low moisture, with an elastic curd. While the flavors vary depending on the type of milk used and the aging locations, they substitute well for one another in recipes and cheese boards because of the overriding similarities.

Having an intense flavor but a spongier curd that melts well, gouda is an excellent substitute for Danish-style or American-style fontina.

Because provolone’s production takes advantage of a lipase enzyme, it has the recognizable sharpness also present in fontina. Although it has none of the mushroom-like piquancy of fontina, provolone is an excellent melter and will substitute nicely for Danish or American fontina on a sandwich or pasta dish. 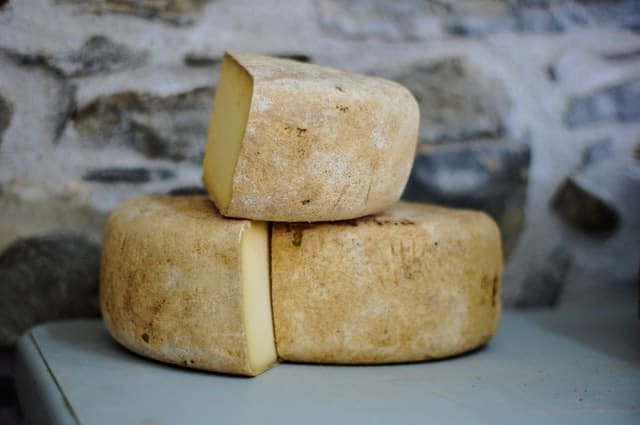 Italian Fontina is mushroomy, earthy, nutty, and smooth. It pairs well with red meats and umami flavors and is a favorite in fondue. Northern European and American fontinas are milder, less mushroomy, and creamier in taste, yet still with a pleasant lipase sharpness.

True Fontina Val D’Aosta is so pungent that it overpowers many foods. Roasted meats and vegetables stand up well alongside this cheese. It also combines well with simple flavors that allow it to shine; a favorite pairing of Italians is simple toasted bread. Experts almost universally recommend enjoying it with a sturdy Chianti.

The milder styles of Fontina tolerate sweet, fresh, and fatty foods well. Good choices are prosciutto and fresh greens, or a robust fruit like dried figs or strawberry jam alongside a Pinot Grigio.

For the authentic Fontina experience, the only option is Fontina Val D’Aosta DOP. Expect to pay upwards of $20-$30 per pound, plus a shipping price (since this cheese is rarely available in local stores). American grocery store brands are a far cry from Fontina Val D’Aosta; they are more reminiscent of provolone and very mild. Yet, if you are looking for an approachable fontina-style cheese, Boar’s Head is a first-rate choice, and it is available in any supermarket.

Where to Buy Fontina 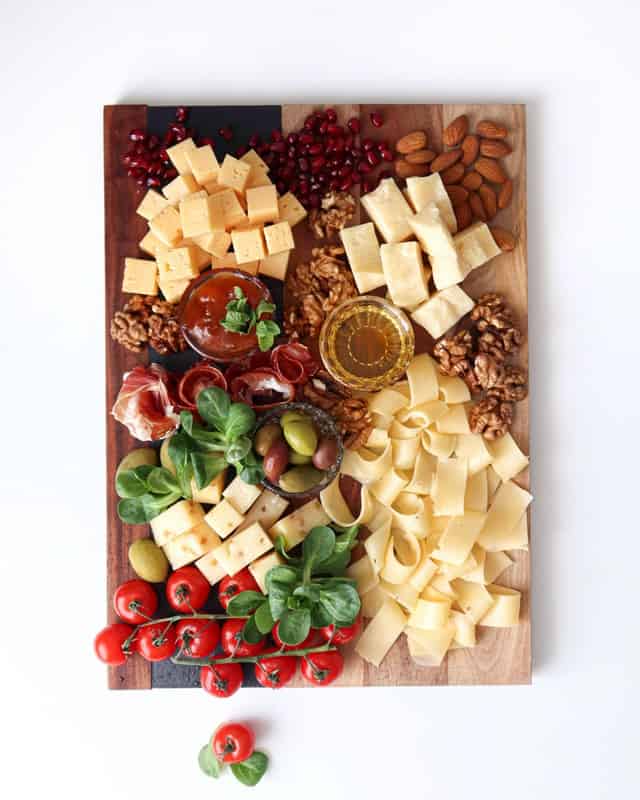 Online curators like igourmet.com make even Fontina Val d’Aosta accessible to everyone. They also sell Danish, Swedish, Italian, Scandanavian, and American-made fontina. If your town boasts a good cheese shop, they are sure to sell at least one type of fontina, and they should order you something specific upon request. Some larger cheese shops, such as Murray's out of Greenwich Village, have a thriving online business and can ship their wares all over the country.

- Here's a basic, easy to follow recipe that will give you "Americanized" fontina.

Authentic Fontina Val d’Aosta is made from raw, unpasteurized milk. However, the fermentation and aging process renders it safe to eat, and tests have shown no pathogens like E. coli or Listeria in the final product. Most other styles of fontina are made from pasteurized milk.

“Fontina” is a broad style encompassing many different kinds of cheese. The disparate members of the category are united by high fat content, lipase-induced sharpness, similar cultures that create small eyes, and reliable meltability. For the full experience, try Fontina Val D’Aosta as well as the milder versions from California or Denmark.

If you have any questions or comments, leave a note below 🙂 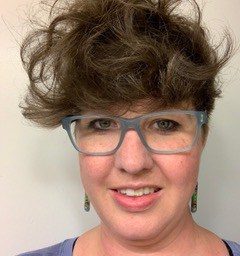