Yes, You Can Toast Bread in an Air Fryer – Here’s How!

How to Clean Your Coffee Maker Without Vinegar: 5 Easy and Powerful Substitutes

At one time or another we've all indulged in a fat, juicy slice of bacon. There's truly nothing like it. But for most of us, we eaten bacon sporadically. We pull it out for those special occasions, and then,

We forget about it!

A lot of us probably have a pack of bacon aging in our fridge at this very moment,

but then the day comes...

You crave the fatty, savory, sweet crunch of a perfectly cooked piece of bacon. You shuffle through the fridge and there it is, your long lost pack of bacon.

Before you go tearing into that package like a raving lunatic, let’s answer a critical question:

Does bacon go bad? and if so, when, and how can we tell?

Yes, of course bacon has a shelf life. But figuring it out may not be as simple as reading the label. Knowing for sure requires a three stage test, of which we've detailed below.

Table of Contents
How Long Does Bacon Last in the Fridge
Signs Your Bacon has Gone Bad
Storing Bacon Properly
Freezing Bacon
How Long Does Turkey Bacon Last?
Cooking Your Bacon
How to Know if Your Bacon is Done
What Happens if you Eat Bad Bacon?
Some Cool Facts About Bacon
A Pig’s Journey to North America
In Conclusion

How Long Does Bacon Last in the Fridge

Opened bacon will last approximately 1 week in the fridge before it begins to spoil (1.)

Unopened bacon can last 2 weeks or more in the fridge, however ALWAYS consult the expiration date on the package.

This number will change based on the type and processing style of the bacon.

Signs Your Bacon has Gone Bad

While there are many methods to detecting rancid bacon, three of our senses will always guide us to determine whether or not our bacon is still good. 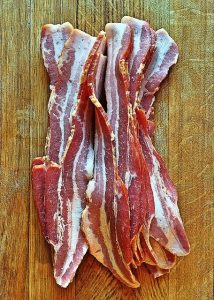 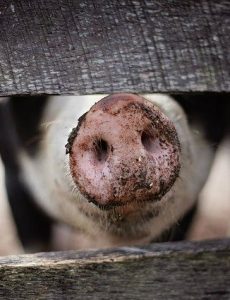 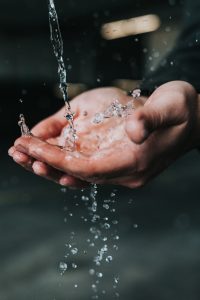 If a week has passed since the sell-by date, it’s best to toss it. While it may be edible, I recommend buying a fresh pack and having zero doubts about the quality.

If your bacon doesn’t have a sell-by date, use the "look, smell and touch" test. If anything is questionable, throw it out.

If you think your bacon has gone bad, wrap it in plastic or foil and throw it away to avoid a smelly garbage or contamination of other foods or surfaces. Thoroughly wash your hands and any surfaces used after handling.

Storing bacon for optimal preservation means keeping it cool, and keeping it away from oxygen. The easiest way to do this is to keep your bacon in a sealed bag in the fridge.

If you cook your bacon, it can be stored in the fridge (in a sealed container) for seven days to reheat later or use in recipes throughout the week.

Freezing your cooked bacon is another option. When cooking, take bacon off heat slightly early, just before it gets crispy. Lay it out on a paper towel to absorb excess fat, and once completely cooled, it can be stored in freezer bags for up to 3 months.

Remove as much air as possible from bags to avoid freezer burn or contamination. Vacuum Sealing can also be used after opening to ensure a tight seal and minimize air getting in.

Be aware that keeping bacon in the freezer can change the taste, harbor freezer burn, and cause fat rancidity. Use no longer than two months after freezing for the best quality taste.

Depending on the type of bacon you buy, these time zones can slightly differ.

Always use the "look, smell and touch" method to properly judge your bacon.

How Long Does Turkey Bacon Last?

Check the expiration date, but turkey bacon can last up to 2 weeks. Keeping it in a sealed package in the fridge with minimal exposure to warmer temperatures and oxygen, you'll find the turkey bacon to last a few weeks.m

If you're skeptical, we recommend doing the look, smell, touch test. If you're still unsure, we recommend throwing it away. It's just not worth the possibility of getting sick. 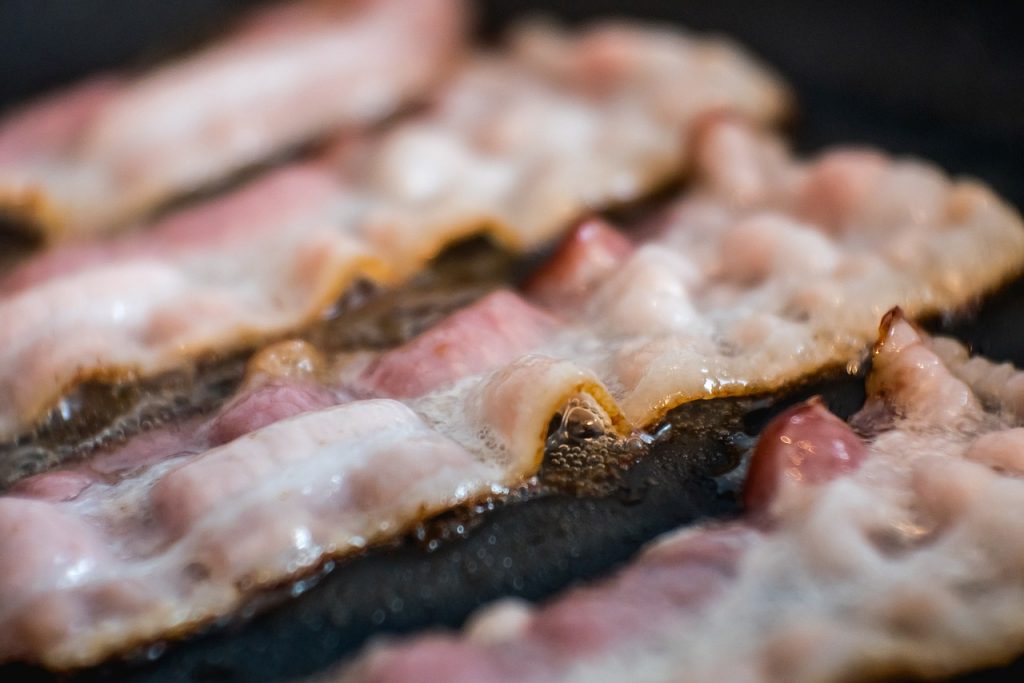 Bacon can be cooked in an oven, microwave, or stovetop. Pork products should always be prepared to a minimum internal temperature of 145°F (62.8°C).

Bacon is safest when cooked until slightly crispy.

Be aware that bacon cooked excessively may become hazardous due to an increased amount of nitrosamines (carcinogens). You don’t want to be eating these for breakfast. If you’re bacon is black, you’ve cooked it too much.

How to Know if Your Bacon is Done

Any pork should be cooked to an internal temperature of at least 145°F. If you don't have a thermometer, look for color deepening throughout the bacon.

The muscle (pink portions of the strips) should turn dark purple(red)/brown.

The fatty, white portions should thicken and become less transparent.

What Happens if you Eat Bad Bacon?

Eating raw bacon, or bacon that has gone bad, can increase your risk of toxoplasmosis,
trichinosis, and tapeworms. Undercooked or raw meat of any kind increases the risk of food poisoning by harboring viruses, bacteria and parasites. 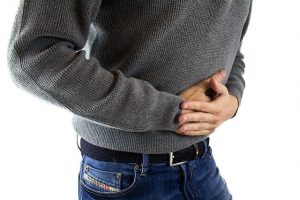 Every year 48 million people in the United States get food poisoning, many of these from raw or rotten meat. It's always best to ensure you're cooking is fresh and free of any strange discoloration, smells or textures.

Always store your bacon correctly to decrease the chances of getting sick.

If you eat bacon that has gone bad, you may  symptoms like nausea, vomiting, diarrhea, fever, chest pain, and dehydration, which can ultimately lead to hospitalization. Food poisoning from pork may come on quick, or take weeks to surface.

Some Cool Facts About Bacon

Bacon has long been praised for its ability to spark taste buds in a uniquely delicious way. The mouth-watering pork we love so much, can be traced back to 1500 B.C. when the Chinese started curing pork belly with salt.

Speculation exists that the Romans and Greeks later learned about bacon production and curing through conquests of the Middle East.

The Romans ultimately improved pig breeding and spread pork production throughout their Empire. During medieval times, bacon and bacon fat were essential ingredients used by Anglo-Saxons for cooking.

A Pig’s Journey to North America

Christopher Columbus was said to have deliver eight pigs to Cuba for his demanding princess. Hernando De Soto, a Spanish explorer, brought 13 pigs to Tampa Bay in 1539, and the Native Americans found they loved the taste of pig.

Three years later, after De Soto was killed during his rule, his men had over 700 pigs...thus, the pork industry in America had begun. 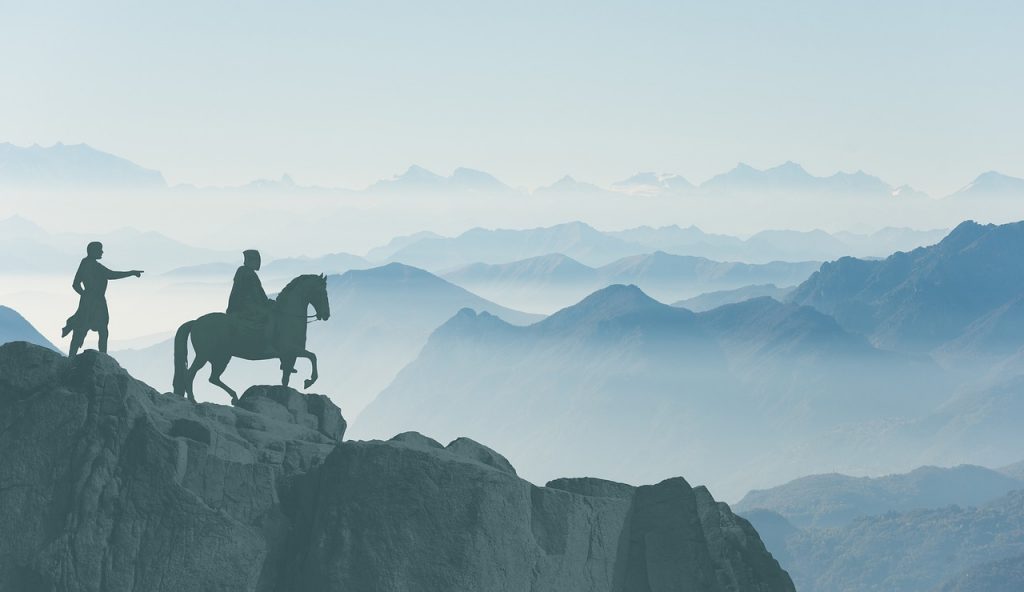 During World War II in America, bacon fat that was left over from home cooking was brought back to the butcher and ultimately donated to the war effort. Because pig meat was an affordable means of food, it was used in high quantities for cooking and making incendiary devices and explosives.

Last year, the foodservice industry in America used 13,000 pigs worth of bacon to serve their guests.

We can see that pig production has come a long way!

Bacon is a delicious food item that many people enjoy often. To get the freshest bacon, buy high-quality pork-belly.  If you're interested in making your own bacon, the grilling dad made a pretty impressive post.

Bacon must always be stored properly at the right temperature, and cooked thoroughly (sooner rather than later, after purchasing). Use Looking, Smelling and Touching to determine if you’re in the clear or need to head to the store for a new pack.

If you have any doubt that your bacon isn't good, it’s best not to risk it. Any doubt...toss it out!